Iranian ships could join wave of flotillas to Gaza, says Hamas chief. Sure Thing! And I Could Win the Lotto Tomorrow! 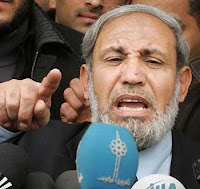 By Donald Macintyre, in Gaza City
The Independent

"A top Hamas leader has warned Israel to expect more Gaza-bound pro-Palestinian flotillas over the next two months, including vessels "from the Gulf". Mahmoud Zahar, often seen as the dominant figure in Hamas's political leadership in Gaza, said that he had been informed by "people ... from the Gulf states" that "after the Mondial [World Cup] at least eight ships will come from the Gulf"......"
Posted by Tony at 4:04 AM