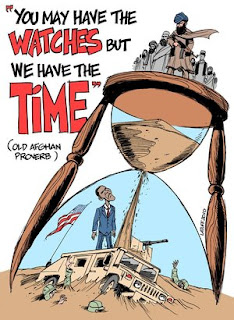 "As General David Petraeus, the mainstream US media's new armored Messiah, takes command in Afghanistan, the myth of his "successful surge" in Iraq could not but linger. Anyone who buys the Pentagon's spin and believes the same conquest will happen in the Pashtun south and southeast of Afghanistan must have smoked Hindu Kush's finest.....

If Petraeus goes "clear, hold and build" COIN in Pashtun lands he is doomed. If Petraeus gets restless and produces a Fallujah in Pashtun lands, he is also doomed (that may be in effect right away, as one of his minions told Fox News that rules of engagement will be more "kinetic" - code for more US firepower and more civilian casualties.) So what's the point of all this upcoming carnage? Well, there are so many - the poppy trade, the "Saudi Arabia of lithium", the ultimate pipe dream known as Trans-Afghan Pipeline, those military bases spying both Russia and China ... So many rats scurrying around the sinking US flotilla in the sand, but what the hell, there's another successful "surge" to sell and the (war) show must go on. "
Posted by Tony at 6:37 AM