Despicable Action by Russia in Support of the USraeli Puppet 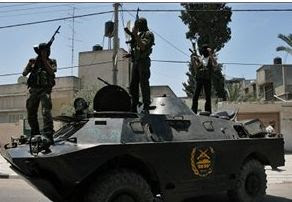 Russia To Send 50 Armored Vehicles To The P.A.

"Russian Foreign Minister, Sergey Lavrov, stated that the Palestinian Authority will soon receive 50 Russian armored vehicles that were donated by Russia several years ago but Israel opposed the delivery.

Visiting Ramallah, Lavrov said that the armored vehicles are currently in Jordan and that he hopes they will be transferred to the Palestinian Authority in the West Bank in the coming days.

The vehicles were offered by Russia in 2005 and are reportedly meant to help the P.A. maintain order [Translation: To help the Israeli occupation and to strengthen the colonization of Palestinian land. Thanks Russia; you have now earned credit with the Zionist Lobby in Washington and you can cash it later for something you need. Tfuh on Russia!]......"
Posted by Tony at 6:57 AM