How Goldman gambled on starvation 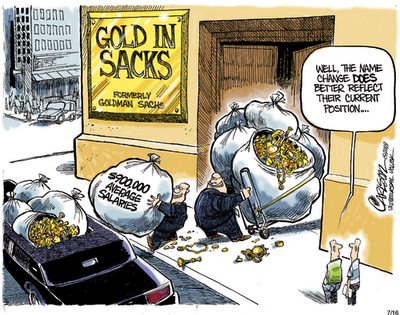 Speculators set up a casino where the chips were the stomachs of millions. What does it say about our system that we can so casually inflict so much pain?

"By now, you probably think your opinion of Goldman Sachs and its swarm of Wall Street allies has rock-bottomed at raw loathing. You're wrong. There's more. It turns out that the most destructive of all their recent acts has barely been discussed at all. Here's the rest. This is the story of how some of the richest people in the world – Goldman, Deutsche Bank, the traders at Merrill Lynch, and more – have caused the starvation of some of the poorest people in the world.

It starts with an apparent mystery. At the end of 2006, food prices across the world started to rise, suddenly and stratospherically. Within a year, the price of wheat had shot up by 80 per cent, maize by 90 per cent, rice by 320 per cent. In a global jolt of hunger, 200 million people – mostly children – couldn't afford to get food any more, and sank into malnutrition or starvation....

If we don't re-regulate, it is only a matter of time before this all happens again. How many people would it kill next time? The moves to restore the pre-1990s rules on commodities trading have been stunningly sluggish. In the US, the House has passed some regulation, but there are fears that the Senate – drenched in speculator-donations – may dilute it into meaninglessness. The EU is lagging far behind even this, while in Britain, where most of this "trade" takes place, advocacy groups are worried that David Cameron's government will block reform entirely to please his own friends and donors in the City.

Only one force can stop another speculation-starvation-bubble. The decent people in developed countries need to shout louder than the lobbyists from Goldman Sachs....."
Posted by Tony at 4:13 AM