BP in the Gulf - the Persian Gulf 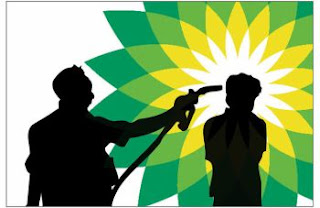 "Many angry Americans have begun boycotting BP in retaliation for corporate recklessness relating to the devastating Gulf of Mexico oil spill. What many don’t know about is BP's role in an entirely different kind of "spill" - the destruction of Iran's democracy more than half a century ago.....

The oil company rebranded itself as British Petroleum, BP Amoco, and then, in 2000, BP. During its decades in Iran, it had operated as it pleased, with little regard for the interests of local people. This corporate tradition has evidently remained strong.

Many Americans are outraged by the relentless images of oil gushing into Gulf waters from the Deepwater Horizon well, and by the corporate recklessness that allowed this spill to happen. Those who know Iranian history have been less surprised. "
Posted by Tony at 6:42 AM