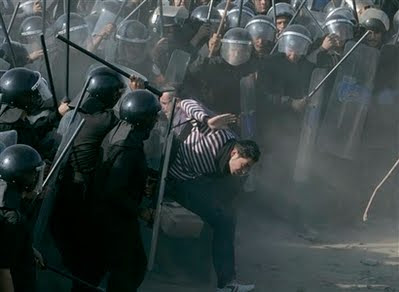 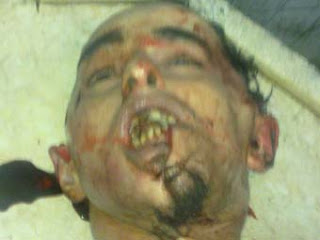 "The "before" and "after" shots looked like the makeover from hell. Before, we have a clean-cut young man who appears to be rather reserved and perhaps even somewhat shy. After, his once-youthful and pleasant face looks up with dead eyes, disfigured beyond recognition. It looks like it has caved in on itself, particularly around the mouth and jaw.
The cause of his death? It depends on whose side of the story you believe. According to eye-witnesses and Khaled Said's family, the 28-year-old Alexandrian was dragged out of an internet cafe and brutally beaten to death.
According to the official story, as outlined in two coroner's reports, he died of asphyxiation caused by his attempt to swallow a packet of "bungo" (a form of marijuana), presumably out of fear of being caught in possession. The post-mortem did concede that the young man had injuries resulting from a "collision with solid objects", but claimed that these had not led to his death....
The unconstitutional emergency law, which activists have been trying to reverse and repeal for years, grants the police and security services so much discretionary power that it has led to torture and even murder, with few perpetrators brought to justice. The Egyptian Organisation for Human Rights documented 46 torture cases and 17 cases of death between June 2008 to February 2009 alone. "Under the state of emergency, the power of security forces has become absolute. It has become a hegemonic force in the country, even judicially," says Bahey Eddin Hassan, general director of the Cairo Institute for Human Rights Studies. "Without a real balance of power, you do not have the rule of law and judicial independence. Without real balance, you lose the voice of the people.""
Posted by Tony at 3:51 AM