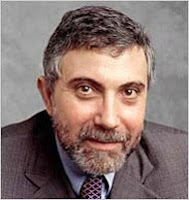 We are now, I fear, in the early stages of a third depression. It will probably look more like the Long Depression than the much more severe Great Depression. But the cost — to the world economy and, above all, to the millions of lives blighted by the absence of jobs — will nonetheless be immense....."
Posted by Tony at 1:47 PM