Habila: We will not allow the return of security chaos 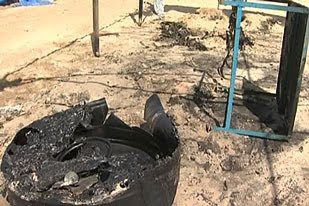 "GAZA, (PIC)-- Palestinian premier Ismail Haneyya has said that his government would never allow the return of security chaos to the Gaza Strip [Sure! That is why UNRWA summer camps for the children were burned, not once, but twice! Tell us more lies Habila.], adding that the execution of convicted agents and criminals came to preserve the Palestinian society.

Haneyya, addressing a tribal conciliation in Gaza on Friday, said that his government was keen on maintaining social security, noting that it managed to solve numerous complicated cases including murder.

The premier asked all families to put an end to their differences through the courts and concerned parties.

Citizens in Gaza Strip are in need of security and stability after suffering a lot from the previous state of security mess that prevailed in previous years, Haneyya underlined."
Posted by Tony at 7:58 AM