Amid the Lies and Prevarication in the Lead Up to the Iran Attack, Tony Blair Gets Cold Feet 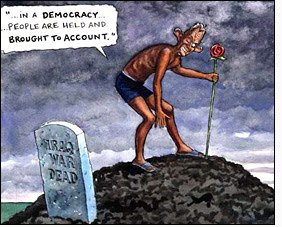 "Over at the Jerusalem Post, unsubstantiated allegation has become bedrock fact, a quite normal state of affairs for the neocon-infested corporate media, determined to set the attack Iran ball in motion.

Last September, the United Nation’s International Atomic Energy Agency made it clear no nuclear weapons program was detected in Iran.

In November, the CIA “found no conclusive evidence, as yet, of a secret Iranian nuclear-weapons program running parallel to the civilian operations that Iran has declared to the International Atomic Energy Agency,” according to Seymour Hersh.....

Confronting a manufactured chimera, “a senior Israeli source in Washington” told the Jerusalem Post “I don’t think we’ve got endless amounts of time to deal with this problem,” in other words Iran must be attacked soon, or sanctions imposed, at least. “This is the time that these things have to be dealt with,” said the anonymous source, citing a recent IAEA report that notes.....

But the Israelis and the American neocons are not keen on accuracy, preferring instead exaggeration, fabrication, distortion, and outright lies—the same sort of fare they produced in late 2002 and early 2003 in the lead-up to the invasion of Iraq.

Finally, as the latest IAEA report makes the rounds, the Australian reports “senior British Government officials fear that US President George W. Bush will attack Iran before his final term in office ends,” worries that coincide with “with British Prime Minister Tony Blair declaring himself at odds with hawks [war criminal neocons] in the US administration by saying publicly for the first time that it would be wrong to take military action” against Iran. “I can’t think that it would be right to take military action against Iran…. What is important is to pursue the political, diplomatic channel…. I think it is the only way that we are going to get a sensible solution to the Iranian issue.”

Of course, when it came to Iraq, Blair fell right in with the murderous neocons, preferring mass murder to sensibility.

If ever there is held a Nuremberg-like tribunal for the neocon war criminals—and I’m certainly not holding my breath—Mr. Blair will naturally be right there in the docket along with his buddy Bush and Cheney."
Posted by Tony at 7:34 AM