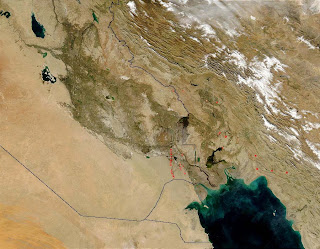 Much of Washington assumes that leaving Iraq will lead to
a bigger bloodbath. It’s time to question that assumption.

"The Bush administration famously based its argument for invading Iraq on best-case assumptions: that we would be greeted as liberators; that a capable democratic government would quickly emerge; that our military presence would be modest and temporary; and that Iraqi oil revenues would pay for everything. All these assumptions, of course, turned out to be wrong.

Now, many of the same people who pushed for the invasion are arguing for escalating our military involvement based on a worst-case assumption: that if America leaves quickly, the Apocalypse will follow.....

Not only is the worst-case scenario far from a sure thing in the event of an American withdrawal, but there is also a best-case scenario. Precisely because the idea of all-out civil war and a regional blowup involving Iran, Saudi Arabia, and Turkey is so horrifying, all the political forces inside and outside Iraq have many incentives not to go there.

Certainly, four years into the war, passions on all sides have been inflamed, communal tensions bared, and the secular, urban Iraqi middle class has either fled or been decimated. The mass terror perpetuated by armed gangs of extremists now occupies center stage. The broken Iraqi state has ceased to exist outside the Green Zone, the economy is devastated, and unemployment is believed to be hovering around 50 percent.

Yet the neoconservatives and the Bush administration weren’t entirely wrong in 2003 when they expressed confidence in the underlying strength of the Iraqi body politic. Though things have gone horrendously awry, there are many factors that could provide the glue to put Humpty Dumpty back together again.

Contrary to the conventional wisdom in Washington, Iraq is not a make-believe state cobbled together after World War I, but a nation united by the Tigris and Euphrates rivers, just as the Nile unites Egypt. Historically, the vast majority of Iraqis have not primarily identified themselves according to their sect, as Sunnis or Shiites......

This shared desire could be another crucial force in helping maintain the integrity of Iraq. The catch-22 of Iraqi politics is that any Iraqi government created or supported by the United States is instantly suspect in Iraqi eyes. By the same token, a nationalist government that succeeds in ushering U.S. forces out of Iraq would have overwhelming support from most Iraqis on most sides of the conflict. With that support, such a government might be able to make the difficult compromises—like amending the constitution to give minority protections to Sunnis—that the Maliki government has been unable or unwilling to make but that most observers believe are crucial to any political settlement that might end the fighting......"
Posted by Tony at 7:54 AM