The British retreat from Iraq brings peril for U.S. troops 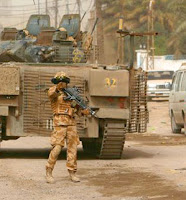 "....In reality, southern Iraq is a quagmire that has defeated all British efforts to impose order, and Blair was pressed by his military commanders to get out altogether -- and quickly. The departure has only been slowed, for the moment, by the pleas of Bush administration officials like Cheney. And far from the disingenuously upbeat prognosis offered by the vice president, the British withdrawal could spell severe trouble for both the Iraqi government and for U.S. troops in that country...."
Posted by Tony at 7:56 AM