Burns: Israel and U.S. Agree Iran Must be Bombed 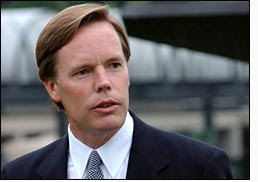 "Nicholas Burns, under secretary for political affairs for Israel—er, excuse me, the United States—has told the neocon-infested Jerusalem Post “that America and Israel are on the same page when it comes to Iran,” in other words, both agree the Islamic country will be attacked, as Israel has demanded this for years now.

“We have a very clear uniformity of views with the Israelis,” said Burns, a member of the Council on Foreign Relations and the Order of St. John, headed until his death by the former SS official, Prince Bernhard of the Netherlands. “One of our major [priorities] is obviously to work very closely with Israel and to be a good partner with Israel.” Burns made the comments while speaking at the Brookings Institute, home of the Saban Center for Middle East Policy (the Israeli-American media-mogul, Haim Saban, has proudly declared, “I’m a one-issue guy and my issue is Israel”)......"
Posted by Tony at 4:44 AM