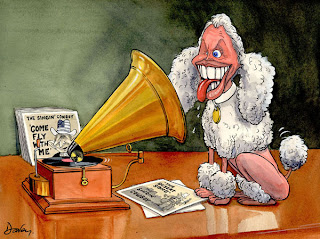 ".....And so it was, listening to Tony Blair sing the praises of his Iraq adventure on the Today programme on Thursday, that my mind began to wander. If it wasn't all such a bleeding mess, I thought vaguely, the prime minister's delusions of success would be almost comical......

Listening again to Blair's Today interview, it is easy to imagine his declarations as simply one melody in a discordant symphony, a series of those beloved soundbites that could be spliced with contrapuntal news of actual events. "We should be immensely proud." Crash! A six-hour firefight in Ramadi leaves 12 dead. "What we had to do was rebuild an Iraqi army and police - we did that." Bang! A US soldier dies and three are injured by a roadside bomb in Diwaniya. "It is better now that [Saddam] has gone." Wallop! A car bomb factory is discovered in Baghdad. Just as it was with his apparent inspiration, Comical Ali, it becomes ever more difficult to avoid the suspicion that the prime minister is living in a parallel universe, where success and failure are merely states of mind......

His prime ministerial imitator, however, is assumed to have far loftier plans, with the North American lecture tour a seeming inevitability. Enthralled audiences can no doubt expect more insights such as we gained on Thursday, when the PM appeared to justify Iraq's sprightly journey in the direction of civil war with the observation: "You can't absolutely predict every set of circumstances that comes about." Well quite. You can, however, have a vague punt on possible outcomes, and if you are over the age of 15, not involved in a still-unfathomed platonic infatuation with the US president, and willing to listen to intelligence you didn't pilfer off the internet, you might hazard the road ahead was slightly more pitfall-ridden than seems to have been judged.......

But the smile fades when recalling other pronouncements. "Do not be hasty because your disappointment will be huge," the old crazy warned. "You will reap nothing from this aggressive war, which you launched on Iraq, except for disgrace and defeat." "We will embroil them, confuse them, and keep them in the quagmire," he said later, adding that "they cannot just enter a country of 26 million people and lay besiege to them! They are the ones who will find themselves under siege."

There are, of course, rather fewer than 26 million people in Iraq these days, but even those who dispute the precise extent of the population depletion might agree that it comes to something when, in hindsight, several statements by this preposterous character seem more prophetic than anything spouted by the British government at the time......"
Posted by Tony at 7:20 AM