Lebanon will be first victim of Iran crisis 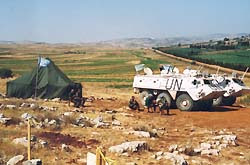 "How easily the sparks from the American-Israeli fire fall across the Middle East. Every threat, every intransigence uttered in Washington and Tehran now burns a little bit more of Lebanon. It is not by chance that the UN forces in the south of the country now face growing suspicion among the Shia Muslims who live there. It is no coincidence that Israel thunders that the Hizbollah are now more powerful than they were before last year's July war. It is not an accident that Sayed Hassan Nasrallah, Hizbollah's leader, says he has brought more missiles into Lebanon.

Why, the Lebanese ask, did President Bashar al-Assad of Syria visit President Ahmadinejad of Iran last weekend? To further seal their "brotherly" relations? Or to plan a new war with Israel in Lebanon?

The images of Iran's new missile launches during three days of military manoeuvres - apparently long-range rockets which could be fired at US warships in the Gulf - were splashed across the Beirut papers yesterday morning, along with Washington's latest threats of air strikes against Iran's military. Be certain that the Lebanese will be the first to suffer.

For the West, the crisis in Lebanon - where Hizbollah and its allies are still demanding the resignation of Fouad Siniora's government - is getting more serious by the hour. Up to 20,000 UN troops - including Nato battalions of Spanish, French and Italian forces - are now billeted across the hillsides of southern Lebanon, in the very battleground upon which the Israelis and the Hizbollah are threatening to fight each other again......"
Posted by Tony at 3:36 AM