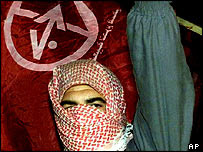 "DAMASCUS - The Popular Front for the Liberation of Palestine (PFLP) on Tuesday hailed the halt of infighting in the Gaza Strip between rival Fatah and Hamas, but stopped short of expressing a wish to partake of the soon-to-be formed unity government.

In a statement published Tuesday the group said that the formula reached a week earlier in Mecca "is not binding for us."

In addition to bringing an end to the violent clashes between Hamas and Fatah, the Saudi-brokered Mecca Accord calls for respecting political, security and economic agreements signed between Israel and the Palestinian Liberation Organization.

"This means recognizing Israel's right to exist and halting resistance against occupation, and this what we have repeatedly rejected," the PFLP statement said.

The PFLP called for a serious and responsible dialogue among all Palestinian factions.

Maher Taher, PFLP's overseas spokesman, told reporters at a press conference that the Islamic Jihad movement would not participate in the forthcoming government, raising the possibility that other Palestinian factions would also not participate.

Taher said also that the Palestinians should stop making concessions "as the U.S. and Israel would never change their stands but would rather ask for more concessions."

He stressed that the road to peace was clear and could be reached through the implementation of UN resolutions that call for the full Israeli withdrawal from the occupied Arab lands to the borders of 1967."

The Famas "unity government" is being exposed, more and more, for the fraud that it is.
Posted by Tony at 9:04 AM