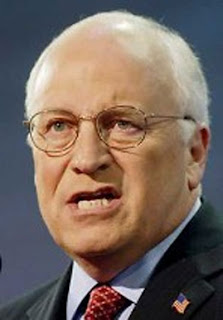 How the Libby trial could impact US foreign policy

".......The Fitzgerald probe is a dagger pointed at the dark heart of the administration, the OVP (Office of the V.P.), and the climactic moment of this epic battle is fast approaching. In the early days of the investigation, left-liberal bloggers were exulting in the possibility that they would see Karl Rove frog-marched out of the White House, but the trial has shown that Rove and Libby were antagonists rather than allies. Before it's all over we may yet see the vice president frog-marched out of the White House – at least metaphorically, in the form of an indictment with Dick Cheney's name on it.

What better way to distract attention away from this coming political bombshell than by dropping some real bombs on Iran?

In the midst of the regional conflagration feared by Brzezinski, prosecuting the Vice President for obstruction of justice and/or perjury would be problematic, at best. In any case, the widening of the war would drive the story off the front pages – think of this as a grand-scale version of Clinton's bombing of the Sudanese pharmaceutical factory just as the Monica Lewinsky was returning to the grand jury.

U.S. war plans against Iran have apparently been in the making for quite some time, but the ratcheting-up of both the rhetoric and the actual war preparations indicates a new level of seriousness on the part of this administration. While most reports reassure us that the decision to go to war has not yet been made, one wonders what turn of events would push the key decision-makers, Bush and Cheney, over the line. A direct threat to one – or both – of them coming out of the Libby trial may be all the impetus they need. A cornered rat is dangerous."
Posted by Tony at 4:23 AM