The retreat from Basra 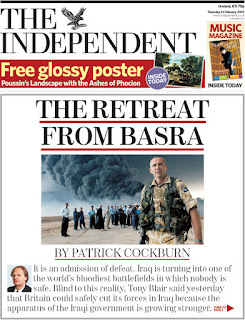 "It is an admission of defeat. Iraq is turning into one of the world's bloodiest battlefields in which nobody is safe. Blind to this reality, Tony Blair said yesterday that Britain could safely cut its forces in Iraq because the apparatus of the Iraqi government is growing stronger.

In fact the civil war is getting worse by the day. Food is short in parts of the country. A quarter of the population would starve without government rations. Many Iraqis are ill because their only drinking water comes from the highly polluted Tigris and Euphrates rivers.

Nowhere in Mr Blair's statement was any admission of regret for reducing Iraq to a wasteland from which 2 million people have fled and 1.5 million are displaced internally......."
Posted by Tony at 4:23 AM