Greasing The Skids For The "Transfer" of Palestinians 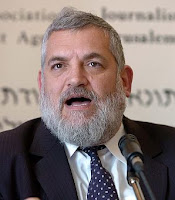 "A new proposal designed to solve Israel's Arab demographic concerns suggests offering a million Palestinian residents of refugee camps in Judea and Samaria incentives totaling as much as $50 billion to convince them to leave the area.

Rabbi Shlomo Aviner, head of the Ateret Kohanim Yeshiva in Jerusalem, and MK Benny Elon (National Union-National Religious Party) have joined forces to promote the proposed program, which they said would be funded by the state. The two men, who are next door neighbors in Beit El, propose paying the refugee camp residents $50,000 to $100,000 each if they agree to emigrate.

"Those poor people have been suffering for six decades," said Elon. "I believe that if we give them the option of leaving they will grab it."

Elon said that he was astounded to discover that Palestinians who want to leave had difficulty getting to Ben-Gurion Airport, for security reasons.

Elon said many western countries, including Canada as well as some in South America, were open to immigrants, especially if they brought cash with them. He said he hoped to gain the cooperation of western countries for the program by emphasizing its humanitarian dimension.

Aviner, a respected halachic authority, has written an article advocating the transfer-for-payment idea, which appeared this weekend in Be'ahava U'Be'emuna, a pamphlet that is distributed in thousands of synagogues across the nation every Shabbat.

"Arabs are busy killing Jews or providing aid, cover and legitimacy to terrorists," Aviner said in a telephone interview.

"There is no end in sight. I do not want to keep killing them to protect myself. So the best solution is to encourage them to leave," he said. "As soon as the word gets around that Israel is paying compensation to anyone who leaves, it will have a snowball effect."

Aviner quoted the Koran as well as the Bible to demonstrate that the Land of Israel belongs to the Jewish people.

Arabs who agreed to stop all terrorism against Israel and to accept second class citizenship, without voting rights, would be allowed to stay, Aviner said.

"Palestine is an integral part of Waqf-administered sacred Islamic land," said Sarsour, who is also the head of the Islamic Movement in Israel. "It belongs to the Muslim people. Benny Elon and others like him will have to trample over our dead bodies to remove us from this place."

Sarsour said "Islam" was willing to normalize relations with a sovereign Israel within the Green Line. He said all Jews living in the West Bank or eastern Jerusalem must leave their homes or renounce Zionism and agree to second-class citizenship, without voting rights.

"But Elon is trying to push for the option of conflict and extinction of both peoples," he said.

Sarsour said "zealots" like Elon and Aviner had caused the destruction of the Second Temple, and that history could repeat itself.

"The weak do not stay weak forever, nor do the strong," Sarsour said."
Posted by Tony at 7:45 AM