Terrorist Attacks in Iran and Iraq point to the U.S. and Britain 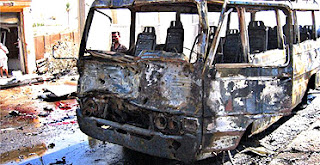 "Both the Iranian government and provincial officials in southeastern Iran have accused the United States and Britain of attempting to create instability in Iran and the Middle East. Since the invasion of Iraq by the United States and Britain, Iran has experienced a relatively new, uncharacteristic, and unfelt phenomenon. This latter is characterised by an increasing number of explosions (or “terrorist attacks”) in Iranian border provinces and areas.

These provinces border Anglo-American occupied Iraq to the West and Pakistan and Afghanistan in the East. Pakistan is within the Anglo-American orbit and has close intelligence links with the United States and Britain, while Afghanistan is under military occupation and Iraq has had cases where Coalition troops have been caught red handed attempting to commit acts of terrorism which have been portrayed as sectarian Iraqi violence or the work of Al-Qaeda in Iraq.

The methodology of terror attacks in the Middle East and around the world is beginning to show a disturbing trend and pattern which is closely related to Anglo-American interests. These "terrorist attacks" directly serve the interests of the US, Britian and Israel. The pattern of terrorist attacks in Iraq, Iran, and even Lebanon, are remarkedly similar.

A study of terrorist incidents and their political outcomes and results will show that on the home front, the United States and its partners have benefited domestically from public outrage which in turn has justified and legitimized their policies. In the Middle East, the incitement of violence and acts of carnage has allowed the United States and Britain to linger in their internationally illegal occupation of Iraq, while spreading sedition amongst the peoples of Iraq and the Middle East.

Creating divisions amongst the different sectarian, religious, and ethno-cultural groups of the Middle East is part of the Anglo-American strategy to balkanize and control the region. The violence in Iraq and the tensions in Lebanon are the direct work of the United States and its partners, which aim to redraw the map of the Middle East in various aspects and ways.

While a link is evident that Iran helped the United States and Britain in establishing the puppet Iraqi government during the questionably Iraqi elections, it is apparent that Washington D.C. and Tehran are no longer on the same wave length with regard to Iraq.....

Gang members arrested following a terrorist blast in southeast Iran disclosed a wide-scale plot hatched by the US for fomenting religious and ethnic conflicts in Iran through assassinating Sunni and tribal leaders.

An informed security source told FNA that the agents in charge of the recent terrorist attack on a bus full of passengers in Iran's southeastern provincial capital city of Zahedan are mercenaries of the intelligence services of foreign countries and that they have undergone intensive trainings to carry out sabotage operations.

Referring to the reason underlying the terrorist operation on Wednesday, he said, "According to the confessions made by the arrestees, the US is deeply displeased with the Iranians' massive rallies on February 11, where the Iranian Shiites and Sunnites hand in hand chanted slogans against the US and in support of unity and the country's policies, and thus, they have decided to sow seeds of discord between the Iranian Shiites and Sunnites through running several operations of sabotage in Sistan and Balouchestan province."

The source also stated that arrestees have confessed that they intended to martyr a large number of Shiite and Sunnite citizens through frequent blasts in the province followed by several other terrorist operations for assassinating Molavis (Leaders of the Sunnis) and leaders of the different tribes in Sistan and Balouchestan in a bid to sow strong discord in the province and even in the whole country. "
Posted by Tony at 6:18 AM