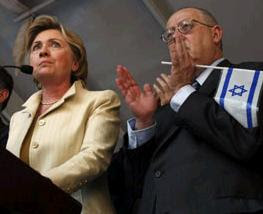 As the voice of reason, from a traditionalist viewpoint, is being hushed or sidelined, the warmongers’ hold on Washington is still as tight as ever, one of whom is Israel and its dedicated friends on Capitol Hill.

"The configuration of the New Middle East — as envisaged by US Secretary of State Condoleezza Rice during the Israeli war against Lebanon in July-August 2006, most certainly has no place for more than one regional power broker, namely Israel.

Under such an arrangement — subservient Arabs and Iran governed by an all powerful Israel and supervised, even from afar by the seemingly philanthropic United States — would ensure Israel’s ‘security’, which has for long served as a casus belli, and supposed American interests in the region; regardless of what one thinks of such logic, in Washington, it is still prevailing......

It is unlikely that Iran will back down; again the North Korea lesson is too fresh, too poignant to ignore. Moreover, the Islamic Republic has a formidable power base in Iraq and Lebanon: Shia militias and the Hezbollah resistance movement respectively; the former is capable of worsening the US army’s plight in Iraq by several fold if decided to join the ongoing Sunni resistance, and the latter has proved an insurmountable foe to Israel in their latest military showdown last summer.

Naturally, the US — which is caught in an unwinnable war in Iraq, confined and blinded by its bizarre alliance with Israel, which is more of a liability to Washington than a strategic advantage and who is watching its own New World Order faltering under its feet, with Latin America going its separate ways, and China moving into what has been the unchallenged domains of the United States for decades — should be expected to avoid a military confrontation at any cost. Savvy US diplomat and former Secretary of State James Baker had many ominous warnings in his Iraq Study Group recommendations. A traditionalist and a pro-business politician, Baker knows well that without a quick exit from Iraq, chaos will befall the waning empire, which is ultimately bad for business. Baker also knows that without solving the Arab-Israeli conflict, the US regional woes will amplify beyond repair......

Evidently, Israel is a prime cheerleader for war, and most likely Israeli agents are working overtime to provide the needed case for war; at least we know, through news reports that Israeli agents are actively involved in Iraq and there is a possibility that they have penetrated the Iranian domain as well, through the northern Kurdish areas. Last November, Israeli Prime Minister Ehud Olmert appointed a major war advocate, Avigdor Lieberman, as the country’s Minister of Strategic Affairs and also as Deputy Prime Minister. Lieberman’s appointment was principally aimed at ‘countering’ the Iranian threat; championing the ethnic cleansing of Palestinians, has recently visited Washington to largely discuss the Iranian threat and won standing ovations and endless praise of Democrats and Republicans alike.

Other Israeli politicians have been adamant in their efforts to convince Washington that a war against Iran will yield strategic dividends and will ease the US mission in reigning in occupied Iraq, and will provide Israel with the security it covets. Of course, Israel knows well the disastrous affect that a war on Iran will bring to the waning American empire (even if merely by observing the Iraqi situation) but it matters little in the end, as long as the Iranian threat is eliminated, or so goes the Israeli logic."
Posted by Tony at 5:24 AM