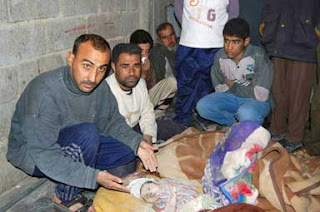 ".......The American cowards bombed Ramadi today.
Many homes were demolished. A family of thirteen was buried under the rubbles. More than 26 civilians were killed, out of which 4 women and several children. Two infants, the youngest was 1 month old.
Men rushed to the ruins trying to rescue whatever human form they can find.
Bare hands, rugged, dust covering their faces and hair, digging and digging...
Most had nothing but a shirt on. No vest, no sweater, no nothing, just a shirt, in this bitter cold.
And I watched their feet, they were wearing plastic slippers in winter, no socks, no shoes...no nothing.
I watched even more carefully and most were very thin and looked malnourished...
They finally managed to pull the little infant out from under piles of thick bricks.
A dust covered baby with an ashen complexion and her tiny lips ripped apart.
A small piece of greyish white cloth was handed and she was wrapped in it in a tiny bundle...

Then the camera zoomed in on the eyes of the onlookers. They all had this one common, identical expression.
A kind of a hollow, lingering gaze like being here and not here.
Then the camera zoomed in even closer... and behind the hollowness in the eyes, lied the utter void, an endless void. A tunnel of despair that seemed to stretch to eternity...
A younger man, not older than 16 wept then stared back at the camera and he kept staring and I saw a lingering death about to explode, in his deep black eyes.......

A lost infant in the ashes, lost faces in the dust, a lost finger in the garbage dumps, a lost mother in the debris, a nation lost in the fire, a country lost in the greed ....and eyes lost in that endless tunnel of helplessness, anguish and despair...
Lost in the total emptiness, in the void of the living dead.

Where is Gilad Atzmon, I need him to hum something to me, I am choking with endless Grief...
You sleep well now."
Posted by Tony at 5:56 AM