Lawrence of Arabia was really a Zionist, historian claims 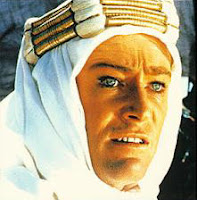 An Interesting Article That Exposes British Treachery and the Pro-Zionist Arab Kings Who Played a Role in the Creation of Israel.

"It appears to be revisionism on a grand scale. Popular imagination, fed on Peter O'Toole's portrayal in David Lean's film classic Lawrence of Arabia, will have a hard time absorbing the startling assertion by the historian Sir Martin Gilbert that its hero was in fact a "serious Zionist" who believed in a "Jewish state from the Mediterranean shore to the River Jordan".

Sir Martin, who plans to back up his myth-challenging claim in his next book, declared here this week that TE Lawrence, long regarded as the unrivalled prototype of the British Arabist, "had a sort of contempt for the Arabs, actually. He felt that only with a Jewish state would the Arabs make anything of themselves."

The British Jewish historian who has written histories of Israel and the Holocaust, as well as his monumental biography of Winston Churchill, made front-page news here when he told The Jerusalem Post during the city's international book fair: "The most interesting thing from an Israeli perspective is about Lawrence of Arabia. The great Arabist, right? The man who supported the Arabs and pushed for Arab nationhood in the 1920s. He is always pictured wearing Arab robes. What is so astonishing ­ which you'll see in my next book, Churchill and the Jews ­ is that he was a serious Zionist."

Sir Martin revealed last night that a series of minutes written by Lawrence, which he uncovered in the National Archive, demonstrated his sympathy with the Zionist cause. Working for Churchill in 1921, for example, he clearly identified "the area of Palestine from the Mediterranean to Jordan" as the "Jewish National Home".

While the discoveries overturn many popular assumptions about Lawrence in Britain and much of the Arab world, they will come as less of a surprise to prominent historians here.

Norman Rose of the Hebrew University, and a leading expert on the history of Zionism in Britain, leaves little room for doubt about Lawrence's admiration for Chaim Weizmann in his biography of the Belarus-born Zionist who became a British citizen in 1910, was the leading lobbyist for the 1917 Balfour declaration pledging a Jewish homeland, and the first President of Israel.

The biography quotes Lawrence as telling the Archbishop of Jerusalem, a sceptic about Weizmann, that the Zionist leader "is a great man whose boots neither you nor I are fit to black". When Weizmann finally settled in Palestine in 1934, and told his friend Lewis Namier that he regretted not having done so a decade earlier, Namier could not resist replying that Lawrence had remarked to him of Weizmann that "one does not build the National Home by living in a villa in Addison Road". This was hardly, to put it mildly, the sentiment of an anti-Zionist.

Lawrence, who had played a leading part in co-ordinating the Arab revolt against the Turks to serve British interests, mediated and translated at the post war Jewish-Arab accord between the future King Feisal of Iraq and Weizmann, which allowed for "large-scale immigration" of Jews to Palestine and implementation of the Balfour declaration in return for the Arab state promised ­ and then reneged on ­ by the British.

Professor Rose said yesterday: "I am no expert on Lawrence, but this was when many people did not see a contradiction between a Jewish National Home and Arab independence."

In 1921, when Churchill was Colonial Secretary, Lawrence worked closely with him as an adviser from the Department's Middle East Department, travelling with him to the Cairo conference when Feisal was assigned the kingship of Iraq and his brother Abdullah the Emirate of Transjordan.

It was from this period that several of the documents uncovered by Sir Martin originate. Lawrence, for example, wrote that part of Abdullah's job would be to "check anti-Zionism" and prevent infiltration from what is now Jordan into the "Jewish National Home".

It seems logical to imagine that working so closely with the minister, he shared at the time Churchill's warmth to the idea of a Jewish homeland, and probably an eventual Jewish state. "Churchill was pro-Zionist," says Professor Rose. "No question." "

It appears that nothing has changed in over 80 years. The Arabs, with their stooge kings and princes, are still doing the bidding of the West and Zionism, while they destroy and colonize the Arab world and finish off what is left of Palestine. The British used the Arabs in the 1920s to fight and expel the Ottomans. For their stupidity, they got rewarded by being divided and colonized and by having Palestine stolen and the Palestinians expelled. Still, most of the Arab world allies itself with the West! Huge U.S. military bases have been established in several Arab countries and these are used to attack and devastate other Arab and Muslim countries. We are told that Iran is the enemy and Israel is our "ally!" Will the Arabs ever wake up from their long stupor and learn?
Posted by Tony at 6:51 PM