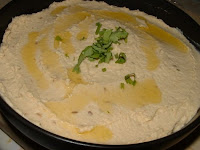 
"The disappearance of hummus from the shelves after a hygiene problem at a plant supplying supermarkets has revealed the depth of popular addiction to this appealing paste. Its taste, at once earthy and refreshing, now has a large place in the British palate. Its grainy texture offers what food chemists call "mouthfeel" at its best. It is as moreish as chocolate or ice cream, yet its healthy ingredients induce a feeling of virtue not available with those of other foodstuffs. Who could shake a stick at sesame seeds, chickpeas, olive oil, cumin, garlic and lemon juice? And who expects to wake up to find that the British Medical Journal has identified hummus as the cause of some feared disease?

It is best made at home, but bought versions are not to be despised. In the Middle East it is a dip about which there are many schools of thought. The supersmooth hummus of Beirut is different from that of Damascus, lighter than that of Cairo, and a world away from the rougher product of Cypriot kitchens, while the Israelis tend to skimp on the olive oil. Apart from using good oil, the most important difference is to do with the chickpea skins, which must be rigorously rubbed off, or else grittiness ensues.
The process through which hummus, pesto and salsa have become essential lubricants of British life, displacing the old trinity of salad cream, tomato ketchup and brown sauce, has been a beneficial one. But while pesto divides and salsa inflames, hummus soothes. May it soon return to the aisles."
Posted by Tony at 4:59 AM