As Nuclear Deadline Passes, US and Iran Trade Accusations of Bombing Involvement 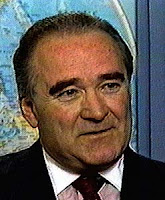 "The White House has dismissed a suggestion from Iranian President Mahmoud Ahmadinejad that Iran would close its nuclear facilities as long as Western nations did the same. His comments came as a deadline set by the UN for Iran to freeze its uranium enrichment program expires today. Meanwhile Iran has accused the US of backing a bomb attack that killed 11 Revolutionary Guards, just one week after the US accused Iran of supplying bombs targeting US troops in Iraq. We speak with retired Air Force Colonel Sam Gardiner.A retired Air Force Colonel, he has taught strategy and military operations at the National War College, Air War College and Naval War College.....

AMY GOODMAN: Can you talk about these latest revelations of plans?

COL. SAM GARDINER: Sure. Actually, I find the BBC article to be completely credible. Let me take the two points that they make and explain why I think they are. The first thing is they talk about the trigger of a high casualty event in Iraq. That is totally consistent with the plans that were drawn up before the invasion of Iraq. We now know from the released plans, which at that time were classified “Top Secret, Polo Step,” that there was a series of triggers, that if they were to be pulled, the United States would go ahead of its plan in the invasion of Iraq. So, having a trigger is both in the way that the Pentagon does planning, and also it makes sense in the argument that the administration is making about what needs to be done with Iran.

The second thing about identifying a nuclear program is even more concerning and probably the one we ought to worry about. We have to remember that the President has said Iran can't be allowed to have a nuclear weapon. But he has always -- or not always -- mostly adds a phrase beyond that, which says, “or the knowledge to produce nuclear weapons.” That's a very important follow-on statement, consistent with what Israel has said. The way that is generally interpreted is that if Iran can put together 3,000 centrifuges for enrichment, they then will have the capability or the knowledge to produce a nuclear weapon. That event, according to the head of the IAEA yesterday, could occur within the next six months, so that if you take the President at his word, and if you take the estimate from the International Atomic Energy Agency, we will cross the US red line within the next six months, and presumably we can't stand that. And when we say that, that means we conduct a military operation against the Iranians.....

AMY GOODMAN: Do you think the 21,000 extra troops, what the President calls the “surge,” could actually be targeted at Iran as much as Iraq?

COL. SAM GARDINER: Well, let me modify that a little bit. We learned over the weekend that there is a surge within the surge. It is not 21,000 anymore. It's gone above that. It was announced on maybe Friday evening or Saturday that an additional headquarters is going to Iraq, consisting of about a thousand additional people. Now, what's fascinating about that is it was on the same day that the commander in Baghdad said, "I don't need any more headquarters." My interpretation of that is that this provides the capability, if the United States were to put some of these new forces into the border area with Iran, to take control of that. This is not meant, I don't think, to invade Iran. I think that this is preparing for the possibility that if a strike is conducted against Iran, that these units could block any sort of an incursion into Iraq....."
Posted by Tony at 9:29 AM