Darth Vader Spells it Out 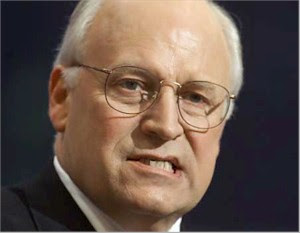 "He has endorsed Republican senator John McCain's proposition that the only thing worse than a military confrontation with Iran would be a nuclear-armed Iran.

In an exclusive interview with The Weekend Australian, Mr Cheney said: "I would guess that John McCain and I are pretty close to agreement."

The visiting Vice-President said that he had no doubt Iran was striving to enrich uranium to the point where they could make nuclear weapons.

He accused Iranian President Mahmoud Ahmadinejad of espousing an "apocalyptic philosophy" and making "threatening noises about Israel and the US and others".

He also said Iran was a sponsor of terrorism, especially through Hezbollah. However, the US did not believe Iran possessed any nuclear weapons as yet.

"You get various estimates of where the point of no return is," Mr Cheney said, identifying nuclear terrorism as the greatest threat to the world.

"Is it when they possess weapons or does it come sooner, when they have mastered the technology but perhaps not yet produced fissile material for weapons?"....."
Posted by Tony at 2:09 PM