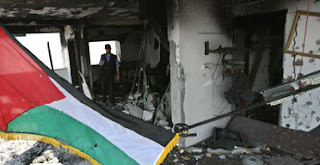 "A UN human rights investigator has likened Israel's occupation of the Palestinian territories to apartheid South Africa and says there should be "serious consideration" over bringing the occupation to the international court of justice.The report by John Dugard, a South African law professor who is the UN's special rapporteur on human rights in the Palestinian territories, represents some of the most forceful criticism yet of Israel's 40-year occupation.

Prof Dugard said although Israel and apartheid South Africa were different regimes, "Israel's laws and practices in the OPT [occupied Palestinian territories] certainly resemble aspects of apartheid." His comments are in an advance version of a report on the UN Human Rights Council's website ahead of its session next month.

After describing the situation for Palestinians in the West Bank, with closed zones, demolitions and preference given to settlers on roads, with building rights and by the army, he said: "Can it seriously be denied that the purpose of such action is to establish and maintain domination by one racial group (Jews) over another racial group (Palestinians) and systematically oppressing them? Israel denies that this is its intention or purpose. But such an intention or purpose may be inferred from the actions described in this report."

He dismissed Israel's argument that the sole purpose of the vast concrete and steel West Bank barrier is for security. "It has become abundantly clear that the wall and checkpoints are principally aimed at advancing the safety, convenience and comfort of settlers," he said.

Gaza remained under occupation despite the withdrawal of settlers in 2005. "In effect, following Israel's withdrawal, Gaza became a sealed-off, imprisoned and occupied territory," he said......"
Posted by Tony at 4:29 AM