Chris Hedges on “American Fascists: The Christian Right and the War On America” 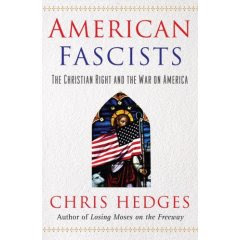 "A new book by Chris Hedges called “American Fascists: The Christian Right and the War On America” investigates the highly organized and well-funded "dominionist movement." The book investigates their agenda, examines the movement's origins and motivations and uncovers its ideological underpinnings. “American Fascists” argues that dominionism seeks absolute power in a Christian state. According to Hedges, the movement bears a strong resemblance to the young fascist movements in Italy and Germany in the 1920s and '30s. Chris Hedges was a foreign correspondent for the New York Times for many years where he won a Pulitzer Prize. He is also the author of "War Is a Force That Gives Us Meaning" and "Losing Moses on the Freeway." Chris has a Master's degree in theology from Harvard University and is the son of a Presbyterian minister. He is currently a senior fellow at the Nation Institute - and he is here with me now in the studio......

AMY GOODMAN: It’s good to have you with us. Why did you write this book?

CHRIS HEDGES: Anger. I mean, I grew up in the Church and, of course, as you mentioned, graduated from seminary, and I think these people have completely perverted and distorted and manipulated the Christian message into something that is the very antithesis of certainly what Jesus preached in the Gospels.

AMY GOODMAN: Who are “these people”?

CHRIS HEDGES: These are -- you know, they’re not -- we use terms like “evangelical” and “fundamentalist” to describe them, and I think that those are incorrect terms. Traditional fundamentalists always called on believers to remove themselves from the contaminants of secular society, shun involvement in politics. Evangelical leaders like Billy Graham's always warned followers to keep their distance from political power. He, of course, was burned by Richard Nixon, came to Nixon’s defense and then when it publicly came out that Nixon lied, it taught a lesson to Graham.

This is a new movement, as embodied by people like James Dobson or Pat Robertson or Jerry Falwell, who call for the creation of a Christian state, who talk about attaining secular power. And they are more properly called dominionists or Christian reconstructionists, although it’s not a widespread term, but they're certainly not traditional fundamentalists and not traditional evangelicals. They fused the language and iconography of the Christian religion with the worst forms of American nationalism and then created this sort of radical mutation, which has built alliances with powerful rightwing interests, including corporate interests, and made tremendous inroads over the last two decades into the corridors of power....."

Click Here to Watch, Listen or Read Transcript
Posted by Tony at 2:26 PM