US Attack on Iran: An Accident Waiting to Happen 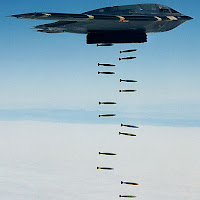 ".......Think about it! As the world goes about its business as usual, the US could well be on the brink of attacking Iran’s nuclear facilities using nuclear-tipped bunker busters. Evidence there is such a plan on the table is coming thick and fast but there is nothing we can do about it......

One of the most disturbing things is the way the new US Defense Secretary Bob Gates keeps insisting his country has absolutely no plans to attack Iran.

Dan Plesch, one of Britain’s leading commentators on defense and security doesn’t believe him. “American military operations for a major conventional war with Iran could be implemented any day,” says Plesch.

Professor of International Law Francis A. Boyle doesn’t believe him. He wants George W. Bush and US Vice President Dick Cheney impeached before they can start a wider war in the Middle East. “I believe that they [the neoconservatives] would like the opportunity to break the taboo of Hiroshima and Nagasaki and indicate to the world -- we here in the United States are fully prepared to use nuclear weapons and we just used them against Iran,” he recently said on Talk Nation Radio.

Former UN weapons inspector, turned peace activist, Scott Ritter isn’t swallowing Gates’ assurances either. Here’s what he said on the subject during a recent lecture: “Ladies and gentlemen, we’re going to war with Iran. It’s going to happen. There’s nothing we can do to stop it.”......

In truth, there could be method in his madness. Various papers penned by his neocon friends before he took office (“Clean Break” and the Project for the New American Century’s “Rebuilding America’s Defenses”) make clear the Bush administration’s end goal, which is control of this region and its resources to stem the rise of competitors.

There were basically two obstacles to that goal: Iraq and Iran. Iraq has been dealt with and now there is only one. Bush has vowed that he will not leave office with the prospect of Iran achieving a nuclear arsenal any time soon......

Interestingly, former US National Security Advisor Zbigniew Brzezinski, once a fervent advocate of full spectrum US domination, recently warned a Senate committee that the Bush administration might resort to such tactics. A false flag operation would allow the US to play victim and frame any attack on Iran in a defensive light. Just as it did before going into Iraq, the White House is demonizing the Iranian leadership......"
Posted by Tony at 6:37 AM