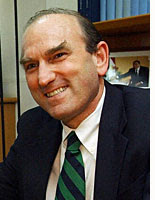 "......Rather, it appears that Rice's own chief Middle East aide when she served as Bush's national security adviser, Elliott Abrams, has become the principal foil in frustrating her efforts to resume a peace process. Until her meeting in Jerusalem last weekend with Israeli Prime Minister Ehud Olmert and Palestinian President Mahmoud Abbas, the process had been frozen since the last days of Bill Clinton's administration.

Abrams' personal influence over Bush could not possibly match Rice's, but his bureaucratic skills and political connections -- notably to the so-called "Israel Lobby" of pro-Likud Jewish organisations and the Christian Right -- give him considerable clout. According to various sources, Abrams has been working systematically to undermine any prospect for serious negotiations designed to give substance to Rice's hopes -- and increasingly impatient demands by Saudi King Abdullah -- of offering the Palestinians a "political horizon" for a final settlement.

"The Bush administration has done nothing to press Israel to deliver on its commitments, beyond Washington's empty rhetoric about a two-state 'political horizon'," Henry Siegman, the long-time director of the U.S./Middle East Project at the influential Council on Foreign Relations, wrote in the International Herald Tribune just last week.

"Every time there emerged the slightest hint that the United States may finally engage seriously in a political process, Elliott Abrams would meet secretly with Olmert's envoys in Europe or elsewhere to reassure them that there exists no such danger," he complained......

On the Israeli-Palestinian conflict, Abrams has long been identified with his hard-line patrons, such as Perle and Podhoretz, who have strongly opposed the "land-for-peace" formula that, until the younger Bush, had been official U.S. policy since 1967......

Throughout the 1990s, Abrams denounced the Oslo peace process in the strongest terms -- a Likud government was engaged in it. When Palestinians launched the second intifada in September 2000, he lambasted mainstream U.S. Jewish groups for their continued support for peace talks between Israel and the PA as "self-delusion". "The Palestinian leadership," he wrote, "does not want peace with Israel, and there will be no peace..."

Signs of a serious breach between the two, however, surfaced during the first days of last summer's Israel-Hezbollah conflict.

Rice reportedly favoured a request by Olmert for Washington to discreetly contact Syrian President Bashar Assad about securing the release of two Israeli soldiers captured by the Lebanese group. Abrams not only strongly opposed such a move, but in a meeting with a "very senior Israeli official" in Jerusalem within 48 hours of the outbreak of hostilities, also suggested that Washington would have no objection if Israel extended its military offensive from Lebanon to Syria, a well-informed source who received an account of the meeting from one of its participants told IPS.....

But, as in the Israel-Hezbollah war, Rice is up against a formidable adversary in Abrams and his confederates in the vice president's office who appear once again to have established their own direct line to Olmert, this time through Turgeman and another top adviser, Yoram Turbowicz.

It was that channel that was in play last Friday, on the eve of the Jerusalem talks, when Olmert held a personal telephone conversation with Bush and emerged claiming that the U.S. president had promised to boycott any new Palestinian government of national unity that includes Hamas so long as the Islamist party does not explicitly recognise Israel, renounce violence, and pledge to abide by existing agreements between the Palestine Liberation Organisation (PLO)."The American and Israeli positions are totally identical," Olmert declared,......"
Posted by Tony at 7:38 PM