ANALYSIS: The summit - a slap in the face to the Palestinians 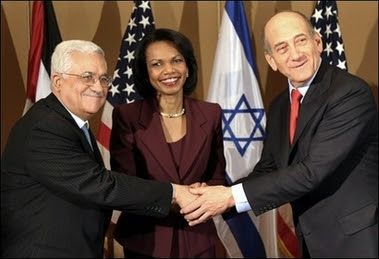 "One of the senior Palestinian Authority officials at Monday's summit sounded upbeat. "The Americans did not raise a white flag and the political horizon is still there. Olmert may reject the unity government but does not reject negotiations with the PLO chairman, Mahmoud Abbas," the senior official told Haaretz.

However, it's hard to tell on what concrete facts the Palestinian official is basing his assessment. Several hours after the meeting, Al-Ayam, a Palestinian daily, published an interview with Secretary of State Condoleezza Rice in which she said that there is no certainty that a Palestinian state would emerge during the tenure of President George W. Bush.

For many in the Palestinian camp this statement was regarded as a slap in the face for Abbas, and raised much concern about the future of negotiations. This was proof to them that the American administration was giving up on the two-state vision and on efforts to reach a final status agreement.

The summit also appeared to have been forced. On the eve of the summit, Rice tried to downplay expectations. S., a Palestinian journalist from Ramallah, commented on the Secretary's visit with an Arab idiom - "you left the same way you came over," or in other words, Rice's visit was unnecessary.

Rice promised to return and that the American efforts to renew the negotiations would continue, but for most in the Palestinian leadership this was merely keeping up appearances. In their view, the Americans were going through the motions to appease the Arab world in order to receive support in Iraq, and to appease the European Union so that the Quartet's unity would continue.

And yet, the prevalent approach in Abbas' circle is that the unity government must be formed. Abbas has a new ally - Ismail Haniyeh. Immediately after Monday's summit Abbas even bothered to update Haniyeh on its outcome.

Olmert's statements and Rice's insinuations that there would be no cooperation with the new Palestinian government is less critical than the need to avoid a civil war. The chairman's men insist that once the government is formed, Salam Fayad would be Finance Minister, Ziyad abu-Amar foreign minister, and Hamas would not have a majority - leaving Israel and the U.S. in a much more difficult position in their attempts to persuade the European Union to uphold its economic boycott against the Palestinians.

"Let's say Olmert refused to talk to the Rais (chairman Abbas) because he formed a unity government. Then what? Will the Palestinians turn Zionist? A unity government is also your preferable option, because a Palestinian civil war will not generate peace and security for the Israelis." "[You see, Abbas' main concern is peace and security for the Israelis.]
Posted by Tony at 4:37 AM