There Goes Another Helicopter 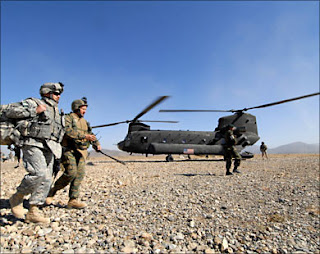 "KABUL (AFP) - Eight US servicemembers were killed and 14 injured when a helicopter crashed in southeastern Afghanistan after a "sudden loss of power and control," the US-led coalition said.

The twin-rotor chopper crashed in the southeastern province of Zabul, about 250 kilometres (155 miles) southwest of the capital Kabul, not far from a main highway, residents and officials said on Sunday.

"Eight coalition personnel were killed and 14 others were wounded early Sunday when a coalition CH-47 helicopter had a sudden, unexplained loss of power and control and crashed in eastern Afghanistan," a coalition statement said.

"The helicopter was transporting a total of 22 people, including aircrew, at the time of the crash," it said.

The coalition said an investigation would be launched to verify the cause of the crash. It had said earlier the chopper came down after reporting engine failure.

"Recent reporting indicated a Taliban build-up for operations against the coalition forces in the region," the statement said.

Zabul is a rugged and mountainous area that sees regular clashes between security forces and fighters from the Islamist Taliban movement....."
Posted by Tony at 5:32 AM