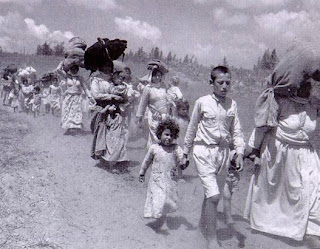 Palestinian Refugees Expelled When Israel Was Created in 1948

"Who said the Israeli left has disappeared? Thirty intellectuals from the left have published a petition calling for putting an end to the "neglect of the evacuees from Gush Katif and northern Samaria." Amos Oz, A.B. Yehoshua, David Grossman, Uzi Dayan, Shulamit Aloni and Yossi Sarid, the cream of the crop, signed a manifest drawn up by the evacuees that refers to the "law's directive" and "morality's directive." "This is the fundamental tenet of democracy," they write with characteristic pathos, in an outburst of concern for the population that for years did everything it could to undermine the law, morality and democracy in Israel. This petition is a disgrace to its signatories.

In recent weeks, there have been many heartbreaking reports about the evacuees' difficulties, especially in a series of articles by Nadav Shragai in Haaretz. The Gush Katif Committee claimed that 49 percent of them are unemployed (the government's employment service, by contrast, reported 25 percent); that 500 families are experiencing a difficult economic situation; that there were ten cases of eating disorders and 12 cases of attempted or contemplated suicide - and here is the punishment: 90 percent of the evacuees' children will not serve in elite Israel Defense Forces units......

The State of Israel compensated the settlers with NIS 4.5 billion. This amounts to evacuation pampering. The one million French settlers evacuated from Algeria in 1962 only received a grant for living expenses of 450 francs per couple for one month, as well as a loan of 20,000 francs to help them reestablish themselves. They were allowed to take only two suitcases with them. The shepherds in the southern hills of Hebron, whose wretched tin shacks were demolished by the state last week, did not receive any compensation. Those who permitted the scandalous settlement in Gaza finally decided to put an end to it, and this should also be accompanied by putting an end to dealing with their case. "Have we forgotten that refugee camps are a ticking social bomb," the leaders of the left ask sanctimoniously, perhaps hinting at their silence in the face of other, much worse atrocities, which we have created ourselves. It is much more correct to ask: Have the leaders of the left forgotten their moral criteria? "
Posted by Tony at 7:15 AM