The US psychological torture system is finally on trial 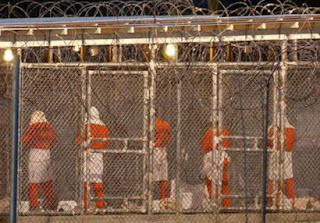 America has deliberately driven hundreds, perhaps thousands, of prisoners insane. Now it is being held to account in a Miami court

"Something remarkable is going on in a Miami courtroom. The cruel methods US interrogators have used since September 11 to "break" prisoners are finally being put on trial. This was not supposed to happen. The Bush administration's plan was to put José Padilla on trial for allegedly being part of a network linked to international terrorists. But Padilla's lawyers are arguing that he is not fit to stand trial because he has been driven insane by the government......

It's difficult to overstate the significance of these hearings. The techniques used to break Padilla have been standard operating procedure at Guantánamo Bay since the first prisoners arrived five years ago. They wore blackout goggles and sound-blocking headphones and were placed in extended isolation, interrupted by strobe lights and heavy metal music. These same practices have been documented in dozens of cases of "extraordinary rendition" carried out by the CIA, as well as in prisons in Iraq and Afghanistan.......

These standard mind-breaking techniques have never faced scrutiny in an American court because the prisoners in the jails are foreigners and have been stripped of the right of habeas corpus - a denial that, scandalously, was just upheld by a federal appeals court in Washington DC. There is only one reason Padilla's case is different - he is a US citizen. The administration did not originally intend to bring Padilla to trial, but when his status as an enemy combatant faced a supreme court challenge, the administration abruptly changed course, charging Padilla and transferring him to civilian custody. That makes Padilla's case unique - he is the only victim of the post-9/11 legal netherworld to face an ordinary US trial......

There is no need to go so far back to prove that the US military knew full well that it was driving Padilla mad. The army's field manual, reissued just last year, states: "Sensory deprivation may result in extreme anxiety, hallucinations, bizarre thoughts, depression, and antisocial behaviour" - as well as "significant psychological distress".

If these techniques drove Padilla insane, that means the US government has been deliberately driving hundreds, possibly thousands, of prisoners insane around the world. What is on trial in Florida is not one man's mental state. It is the whole system of US psychological torture."
Posted by Tony at 4:45 AM