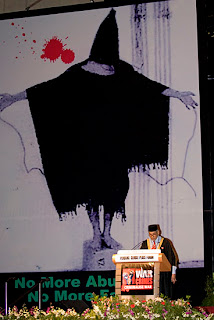 The following text is the testimony given by Professor Ali Shalal, who was tortured at Abu Ghraib Prison. This statement was presented to the War Crimes Commission set up under the helm of former Prime Minister Tun Dr. Mahathir Mohamad, as evidence in the procedure launched in Kuala Lumpur directed against US President George W. Bush, Britain's Prime Minister Tony Blair and Australia's Prime Minister John Howard.

Ali Shalal, known to the World as the "man behind the hood", is a man of tremendous courage and determination. I heard his testimony, I had the opportunity of speaking to him on several occasions in the course of the war crimes Conference. We shared our determination to bring the war criminals in high office to justice.

Ali Shalal is a professor of theology. He is a tremendous source of inspiration. It is important to understand that what Ali Shalal experienced is part of a routine process of torture, applied systematically to those arrested. Many of his companions in Abu Ghraib died as a result of torture or were executed upon their release so that they would not reveal the gruesome horrors and atrocities committed on the orders of the Bush administration.

Ali Shalal survived and provided testimony in the name of all those who were tortured to death. His words will go down in history.

Continue
Posted by Tony at 3:24 PM