'2 US aircraft carriers headed for Gulf' 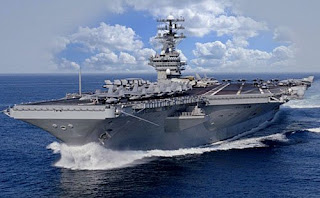 "Two additional United States naval aircraft carriers are heading to the Gulf and the Red Sea, according to the Kuwaiti newspaper Kuwait Times.

Kuwait began finalizing its "emergency war plan" on being told the vessels were bound for the region.

The US Navy would neither confirm nor deny that carriers were en route.....

While the Kuwaiti daily did not name the ships it believed were heading for the Middle East, The Media Line's defense analyst said they could be the USS Theodore Roosevelt and the USS Ronald Reagan. "
Posted by Tony at 8:12 PM