Israel to transfer some Fatah refugees to West Bank (with Video) 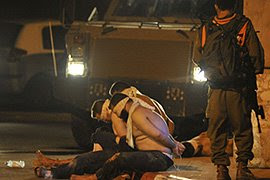 "Defense Minister Ehud Barak decided late Sunday to allow a group of Fatah activists who fled the Gaza Strip over the weekend to be transferred to Palestinian Authority control in the West Bank.

The activists include members of the Hilles clan, some of the 188 Palestinian who escaped into Israel following a series of clashes with Hamas which left 11 people dead. The refugees will be granted temporary asylum in the West Bank city of Jericho, despite initial plans to transfer them to Ramallah.

Israel originally admitted the men following a request from Palestinian President Mahmoud Abbas, on the understanding that they would be sent on to the West Bank.

Israel sent about 30 members of the Helles clan back to the Gaza Strip on Sunday, citing an updated request from Abbas and Palestinian Prime Minister Salam Fayyad.

"Israeli authorities halted the process, however, as they received information that they were being arrested by Hamas," the Israeli army said in a statement.

Israeli defense sources speculated that Abbas repented his initial decision for fear that it would be perceived as his Fatah movement abandoning its last foothold in Gaza and ceding the Strip to Hamas.

Aides to Abbas confirmed this view. "Fatah officials in Gaza should stay in their posts and should not leave Gaza to Hamas," Fahmi Zaghrir, a West Bank spokesman for Fatah, said on Sunday.

However, exceptions would be made for those wanted by Hamas, said Nimr Hamad, an Abbas adviser.

It was not immediately clear how many Gazans would be transported to the West Bank city of Ramallah, where Abbas's Western-backed government is based.

The army said several of the men would remain at least temporarily at Israel's Barzilai hospital near the Gaza Strip, where they have been undergoing treatment for wounds sustained during fighting with Hamas......."
Posted by Tony at 4:49 AM