Despite no conviction, Sami al-Arian remains in US prison 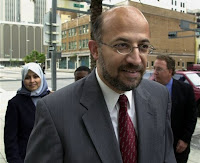 "WASHINGTON (IPS) - Nearly three years after the US government failed to convict Palestinian activist and former college professor Sami al-Arian of any charges in one of the most high-profile terrorism trials following the 11 September 2001 terrorist attacks, he continues to be held in federal prison -- where, if convicted in an upcoming trial on criminal contempt charges, he faces the prospect of remaining for decades....."
Posted by Tony at 3:57 AM