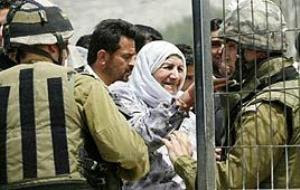 "04/08/2008 The Shin Bet (Israeli Security Agency) is the arbiter of life and death for gravely ill Palestinians living in the Gaza Strip, the NGO Physicians for Human Rights charged in an 83-page report released early Monday morning.

The report includes dozens of pages of testimony by 11 Gazan citizens whom the Shin Bet has allegedly questioned and tried to pressure into providing intelligence information in return for permission to cross into occupied territories on their way to medical treatment outside the Gaza Strip.

According to the report, entitled Holding Health to Ransom, PHR charged that Shin Bet interrogators question Palestinians who have applied (and often already received) exit permits to enter Israel on their way to urgent medical treatment in Israel, the West Bank or Jordan. According to the report, the interrogators demand that the patients provide intelligence information in return for permission to leave.

"The conduct and policy of the Shin Bet have turned patients' vulnerability into a primary means for obtaining security information," the authors of the report charged. "Long waiting times, questioning of the patient about himself and his acquaintances and appropriation of cellphones to extract phone numbers of family members and acquaintances are all part of the harsh atmosphere in which the patient is aware that his refusal to respond may bar him from exiting Gaza for much-needed treatment.

"Once the Shin Bet has established control over a patient, permitting medical treatment is explicitly or implicitly made contingent upon collaboration."

In the past, PHR raised these charges in a petition filed in the High Court of Justice which included several affidavits by Palestinians from Gaza who complained about ISA pressure and coercion. The court replied in its ruling that it had "taken note of the security body's statement that no use is made of a person's illness to obtain information in the realm of security." ......."
Also, Please See:
'Tell us who the terrorists are if you want the doctor'

Contributed by Lucia in Spain.
Posted by Tony at 3:22 AM