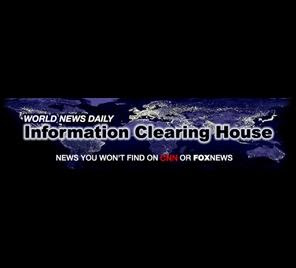 "My friend Tom Feeley is in Big trouble. He runs the web site informationclearinghouse.info which updates "news you won't find in the corporate media" every day. The site is strongly anti-war.

Tom has gotten his share of death threats over the years, but what happened this week is a lot more serious.

Two days ago, Tom's wife found three well dressed men in their kitchen. The man who did all the talking, told Tom's wife (I won't give her name) that Tom must "Stop what he is doing on the Internet, NOW!" As crazy as it sounds, he pulled back his lapel and showed her a gun of some kind which she could not identify. Like I said, Tom has been threatened before, but nothing like this. 4 years ago, he was in a parking lot at Long's Drug store in Southern California and when he tried to open his door to get out, a man in a car next to him opened his door at precisely the same time which prevented Tom from getting out. Then, a 40-ish year old man got out of the passenger side of the vehicle and approached Tom saying, "You need to stop what you are doing on the web"......

I talked to Tom this morning and he is getting by, but he's clearly upset. I do not know his plans, but I know he is ditching his cell phone and (I assume) will have to go underground as much as possible. He plans to keep publishing.

I'll tell you this about Tom Feeley; he is no bullshitter. He is the "real deal" and completely committed to exposing the mob that is presently running our country. He does not understand why, (as he says) "They are reaching down SO far to get someone who just runs web site". But, the truth is, they are. Someone wants him to "shut up" and they apparently have the muscle to do it. He knows he is in danger........"
Posted by Tony at 5:49 AM