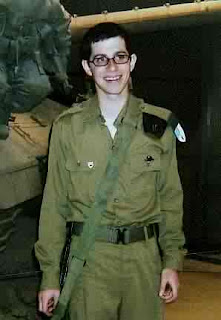 By Khalid Amayreh in the Occupied West Bank

".....Interestingly, Shalit argued that it was his son’s captivity that was holding thousands of Palestinian civilians hostage, people who he said were “uninvolved” and suffering from abject poverty and acute shortage of basic consumer goods.

Well, thank you Mr. Shalit for recognizing the innocence of your state’s victims. Thank you for admitting, though indirectly and probably inadvertently, that Israel is a terrorist state that murders, starves and torments innocent civilians for political reasons.

But if they are innocent people, and they indeed are, then why don’t you tell your leaders that blockading, harming and starving innocent people is wrong and incompatible with moral and religious ethics? Do Jewish ethics condone tormenting innocent people who committed no wrong?....."
Posted by Tony at 2:54 AM