Syrian leader gets top billing in Middle East by doing nothing 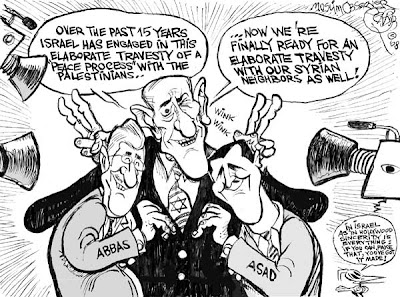 "President Bashar al-Assad is once more one of the "triple pillars" of the Middle East. We may not like that. George Bush may curse the day his invasion of Iraq helped to shore up the power of the Caliph of Damascus. But Mr Assad's latest trip to Tehran – just three weeks after he helped to toast the overthrow of the King of France beside President Nicolas Sarkozy – seals his place in history. Without a shot being fired, Mr Assad has ensured anyone who wants anything in the Middle East has got to talk to Syria. He's done nothing – and he's won [won what?]......"
Posted by Tony at 4:17 AM