Hamas to Israel: We’re Ready for All Options 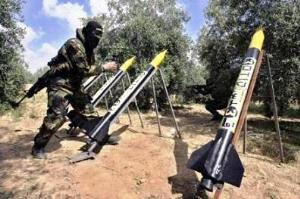 "05/08/2008 In response to Israeli Defense Minister Ehud Barak’s latest threats against Gaza, Hamas resistance group spokesman, Sami Abu Zuhri, said that such threats are “absurd”, stressing that his resistance movement is “ready for all options”.

Abu Zuhri added that Barak’s threats reveal that the Israeli occupation government is not taking the cease-fire truce seriously. The truce was reached between Israel and Hamas in 19 June through an Egyptian mediation. Hamas spokesman said, “These threats reflect the confusion in the Israeli occupation forces in dealing with Hamas and the Gaza Strip and between escalating the aggression and swinging between the escalation of aggression and de-escalation.”

Barak, the Israeli Defense Minister and Labor Party leader, criticized his political rivals on Monday, equating them with hosts of reality television shows, and told his constituents that a military operation in the Gaza Strip was still very much on the agenda.

Speaking at a Labor Party event in occupied Jerusalem on Monday evening, Barak said "anyone who misses the military operations in Gaza mustn't worry, they will come."......."
Posted by Tony at 3:37 AM