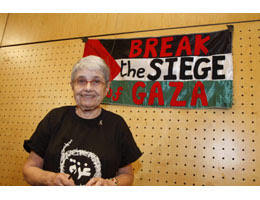 Holocaust survivor Hedy Epstein from the US is pictured following a news conference in Nicosia yesterday. Epstein is among a group of activists planning to sail to Gaza by boat from Cyprus in an attempt to break the Israeli blockade of the Palestinian territory.

"A group of activists including Tony Blair's sister-in-law Lauren Booth plans to break Israel's blockade of the Gaza Strip by sailing into the Palestinian territory.

Some 46 campaigners, among them several Britons, a Holocaust survivor and an 81-year-old retired Catholic nun from the US, will make the 241-mile crossing from Cyprus in two wooden vessels at the end of the week, carrying medical supplies. The journey takes about 20 hours.

The California-based Free Gaza movement wants to open unrestricted international access to Gaza while delivering a "symbolic" shipment of 200 hearing aids and batteries for a society for deaf children and other supplies such as painkillers. Organisers say they will not pass through Israeli waters and have therefore not notified Israeli authorities of their plans.

But they are prepared for the 21-metre (70ft) Free Gaza and 18-metre Liberty to encounter resistance. The Gaza Strip's waters are patrolled by the Israeli navy......

Another aim, ultimately, is to create a permanent maritime link between Cyprus and Gaza. "This is not a one-time symbolic trip," said Israeli organiser Jeff Halper. "The idea is when we get to Gaza we have broken the siege."......"
Posted by Tony at 8:18 PM