The Latest Twist and Turn by Muqtada: The Mahdi Army "Cultural" Wing! 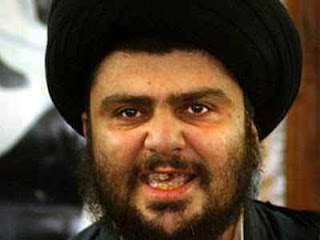 Sadr to Disarm if US Withdraws on Timetable

Spokesman Salah al-Ubaidi was speaking before Friday prayers at which he said the cleric would announce a new cultural wing of his movement. A ceasefire imposed by Sadr on his army a year ago has been a key factor in a drop in violence in Iraq to four-year lows. Sadr, whose political movement controls 10 percent of seats in parliament, has long demanded US occupation troops leave Iraq.

US President George W. Bush has refused to set a firm timetable for withdrawing 144,000 American troops from Iraq, but spoke last month of a general "time horizon" for a pullout. "We feel there's a serious intention by the American forces for a withdrawal timetable at the very least," [how dumb can you get!] Ubaidi said.

"It should not be considered an end to the Mahdi army, but it's a halfway step to dissolving the Mahdi Army. If the US began to implement a withdrawal timetable we shall complete the path to dissolution." The Mahdi Army would largely be turned into a cultural organization, but would still maintain armed cells, Ubaidi said.

Ubaidi said the resistance would not end [what resistance??] until US troops left Iraq but the cleric was ready to take positive steps if Washington moved in the right direction. "If we find (this does not happen) and the U.S. forces change their stance over the timetable, we can change direction also," he said. "This will not mean ending the ceasefire, it will depend on what's going on on the ground."

Baghdad and Washington are negotiating a new security pact that will provide a legal basis for US occupation troops to operate in Iraq when a U.N. mandate expires at the end of the year. Iraqi government officials say an agreement is close. But the White House says it is too soon to say when it can withdraw the forces, which have been in Iraq since the 2003 invasion.

The issue is politically sensitive in the United States, where Democratic presidential contender Barack Obama has pledged to withdraw all combat troops by mid-2010, while his Republican opponent John McCain refuses to set a date."
***
Will the "Mahdi Army" Singing Choir, with a baritone Muqtada, be announced Next? That ought to scare the US occupation troops and force them to leave!
Go....... Muqtada! Encore, ......encore!
Posted by Tony at 3:59 AM