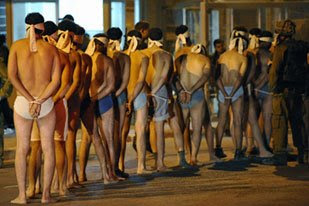 From Joseph Nakhla in the Gaza Strip

"GAZA, (PIC)-- The Israeli media has spoken of dozens of Fatah members and leaders fleeing Gaza Strip to Israel after Hamas forces reportedly closed in on their hideouts in the Shujaiya neighborhood on Saturday.

Al-Shujaiya is an eastern suburb of Gaza City and has a population of more than 80,000.

The Israeli state-run TV channel said as many as 150 Fatah members and loyalists fled to Israel through the Erez and Nahal Oz border crossings Saturday afternoon.

Some of the fugitives reportedly were wounded, mostly lightly to moderately, during a 24-hour showdown with police forces seeking to apprehend suspected murders of six people at a Gaza beach eight days ago.

The wounded were transferred to Israeli hospitals in Bir al Saba, 50 kilometers north east if Gaza.

The perpetrators of Gaza beach bombing were believed to be hiding in the Shujaiya neighborhood, prompting security forces to raid and temporarily isolate that locality in order to capture the criminals.

However, as security personnel advanced through the heavily-populated neighborhood, Fatah gunmen, including snipers stationed on rooftops of multi-story buildings, opened fire at the security forces, killing and wounding a dozen policemen. The security forces eventually called in reinforcements and overrun the hideouts of the suspected murderers.

The Israeli occupation army confirmed that it allowed Fatah men to cross the border into Israel. Fleeing Fatah men reportedly handed over their weapons to Shin Beth officers stationed at the border crossings.

Earlier, security forces in Gaza arrested as many as 20 Fatah members who, disguised in women attire, sought to flee into Israel. Palestinian officials in Gaza said some of the detainees were “most likely” implicated in the 25-July bombing at the Gaza beach. According to Israeli sources, the fleers included Muhammed Hilles, a prominent Fatah leader in the Gaza Strip. It is not certain if Hilles is personally involved in the murderous incident. However, Hilles refused repeated demands by Hamas to hand over suspects who were being protected and hidden in the Shujaiya neighborhood.........

He added that many loyal citizens from the Hilles clan had provided information that eventually led to discovering the whereabouts of the murderers of the five Izzedin al Qassam Brigade members and the 6-year-old girl.

A high-ranking police officer in Gaza told “PIC” that a large arsenal of weapons, including RPGs, land mines, and heavy automatic machineguns were found at the Shujaiya hideouts. He said that some of these weapons came directly from Israel while others originated in the United States.

The Fatah Media, which includes the so-called Palestine TV, generally ignored the disgraceful exodus of Fatah men into Israel, which in the eyes of many Palestinians, underscores the umbilical relationship between the Zionist regime and the “treacherous trend” within Fatah, which is now effectively controlling the movement. The Israeli media said most of the Fatah fugitives were transferred aboard Israeli military vehicles to Ramallah, the headquarters of the western-backed Palestinian Authority.

The fleeing of Fatah men to Israel in the past 24 hours recalls the mass fleeing of hundreds of Fatah fighters, mostly followers of the disgraced former Gaza strongman Muhammed Dahlan last year, following the success of Hamas’s fighters in foiling a CIA-plotted coup against the legitimately elected government. Dahlan is widely believed to have worked closely with the CIA through Gen. Keith Dayton for the purpose of destroying the Hamas government in Gaza. Dahlan had received large shipments of weapons from the US through Israel for use against Hamas. However, the preemptive Hamas move against Dahlan and his militias foiled the American designs in the Gaza Strip...... "
Posted by Tony at 3:36 AM