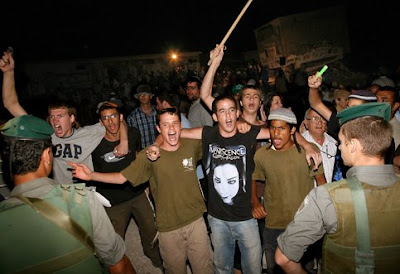 Israeli soldiers stand guard as settlers shout slogans after attacking international peace activists at an evacuated Israeli military camp on the edge of the town of Beit Sahour near the West Bank city of Bethlehem, 6 August 2008.

The report "Justice for All" released last week by the Israeli human rights group Yesh Din examined 205 cases of alleged assault by Israeli settlers that were reported over the years. Only in 13 cases were indictments filed, while 163 cases were closed.

"Conviction rates of Israeli settlers and soldiers involved in violence against Palestinians are around six percent of cases opened due to what we consider unprofessional investigations," Yesh Din's research director Lior Yavne told IPS.

"In many instances the paperwork is either 'lost' or the police or military personnel involved in the investigations claim they are 'unable to identify the perpetrator,'" said Yavne.......

Joel Gullege, a member of the Christian Peacemaking Team (CPT) based in the Old City of Hebron, was taken to hospital a couple of weeks ago where he received stitches after he was stoned and attacked by Israeli settlers.

The attack took place near the village of al-Tuwani, 20 kilometers south of Hebron, in the southern West Bank, as he tried to escort Palestinian children to a school summer camp. The settlers also stole his video camera as he tried to film the attack......."
Posted by Tony at 10:43 AM