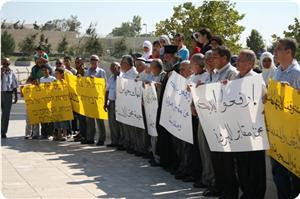 "OCCUPIED JERUSALEM, (PIC)-- The Israeli prosecution and fanatic Israeli settlers have insisted on Tuesday to desecrate sanctity of Muslim and Christian graveyards at the Barwa village in the 1948-occupeid Palestinian lands, and to turn them into animal stockades.

They alleged that there were no graves in the area, but the Aqsa foundation that caters for Muslim and Christian holy shrines in occupied Palestine affirmed that the area was full of graves of Muslims and Christians, presenting "definitive" documents and evidence confirming its claims.

Tens of the village's indigenous inhabitants who were displaced and coercively relocated by the Israeli occupation government in nearby villages, participated in sit-in in front of the Israeli Supreme Court that looks into the case, protesting the Israeli procedures.

Few months ago the Aqsa foundation succeeded in obtaining a temporary restraining order form the court, banning any excavation works and constructions on the graveyards' site.

"It is unfortunate that the Israeli prosecution insisted to turn those Muslim and Christian cemeteries into pens for cows although it contradicts all heavenly laws and international and local statutes", said Mohammed Suleiman, the foundation's lawyer, after he walked out of the court room.

But he highlighted that although the foundation presented clear evidence on the presence of the graves in the site supported by drawings of the burial grounds and names of the buried persons there, it doesn’t expect the court to be fair and just in the case, disclosing a number of previous situations in which the court was biased to the Israeli side.

"This is a very sensitive matter that insults human dignity and desecrates sanctity of the dead people, and we shouldn’t remain arms-folded vis-à-vis those heinous crimes", asserted priest Romanos Redwan Saks, one of the displaced inhabitants of the village as he participated in the sit-in."
Posted by Tony at 5:56 AM