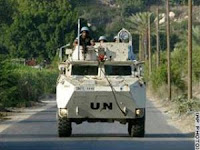 "06/08/2008 The report published Tuesday on UN Interim Force in Lebanon (UNIFIL) commander General General Claudio Graziano's ordering his troops to save any Israeli pilot whose plane may be brought down gave impetus to discussions, clarifications and statements.

Lebanese Army interim commander General Shawki Masri met Tuesday with Graziano, who tried to explain the issue. Lebanese Army sources told Al-Manar that they asked for an official clarification from the UNIFIL, noting that, according to article 9 in the accord signed between both parties, the international forces must hand in any person they detain to the Lebanese army even if this person was not invading the country as in the case of Israeli pilots.

The UNIFIL also issued a statement to deny giving orders to save Israeli pilots. However, the statement seemed to be ambiguous saying that the published report by Lebanese daily Al-Akhbar does not accurately represent the way UNIFIL operates. It also said that the activities of UNIFIL are defined by UN Security Council Resolution 1701 "and are carried out in close cooperation and coordination with the Lebanese Army, which has primary responsibility for security and law and order in the area of operations."

However, UN Secretary General Ban Ki-moon’s spokesman Farhan Haq refused to "assert categorically that UNIFIL will not hand over any Israeli pilot it may come to hold to the Israeli army."......"
Posted by Tony at 5:45 AM