The Jewish settler pogrom against Palestinians must be stopped now 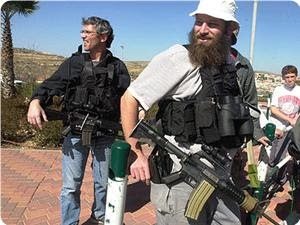 "Nazi-like Jewish settlers have of late stepped up their indiscriminate attacks on Palestinian civilians and their property throughout the West Bank.

In some areas, like in the Hebron region, settler attacks have assumed pogrom-like proportions. What is particularly outrageous is that most of these attacks take place in full view of Israeli soldiers who watch passively as heavily armed settlers gang up on helpless Palestinian civilians.....

The settler reign of terror, along with the Israeli government’s apparent connivance with these criminals, poses a challenge to those concerned about the increasingly diabolical treatment meted out to the Palestinians by the Israeli state.

I believe that in order to prevent settler terror from reaching unthinkable levels, thousands of international observers, including conscientious Jews, would have to be permanently stationed all over the West Bank in order to demonstrate to these thugs and those who stand behind them that the Palestinians are not alone.

The presence of international observers may not succeed in stopping all settler crimes; but it can succeed in deterring and discouraging the perpetration of some of the uglier crimes against innocent Palestinians.

The forces of peace from around the world should also provide Palestinians, especially in remote areas, with high-resolution cameras to film and document settler attacks and savagery.

This particular method has been proven effective in exposing the criminal behavior of Israeli settlers and soldiers against innocent Palestinians in recent weeks.

We all know that had it not been for that young girl who filmed an Israeli soldier shooting a handcuffed and blindfolded Palestinian near Nil’iln, we probably wouldn’t have heard about that incident.

In the end, we must leave no stone unturned until we isolate these thugs who think they are carrying God’s instructions by murdering and terrorizing innocent people.

They must not be allowed to win. Because if they do, the entire humanity will lose."
Posted by Tony at 3:27 AM