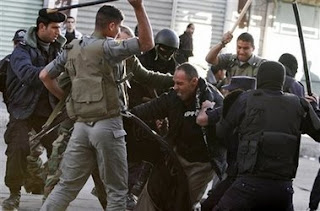 Abbas and the IOF, Working as Hand in Glove
"Palestinian Security forces loyal to the Palestinian President Mahmoud Abbas of Fatah attacked the funeral of a Palestinian boy on Monday afternoon. The boy had been killed by the Israeli army last week.

Villagers from Nil'in took the boy from the governmental hospital in Ramallah on Monday afternoon and marched towered the village for the funeral. Palestinian security officers attacked the protest marchers and arrested at least five local youth.

Witnesses told an IMEMC reporter at the funeral that the PA officers attacked and arrested the men because they were holding Hamas flags.

According to the villagers the body of Amira was sent back to the hospital and the villagers are refusing to clear the streets until the Palestinian police release the arrested men.

Sources in the village of Nil'in told IMEMC that the Israeli army has invaded the village and established army posts all over as soon as the funeral started....... "
Posted by Tony at 3:47 AM